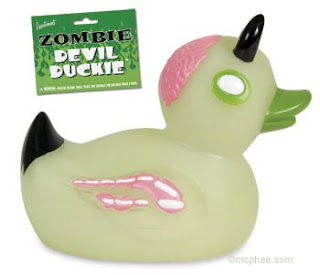 Storytelling in the 20th century was strongly influenced by Freud. An obvious consequence was the self-conscious deployment of symbols. (And even though Freud famously said that sometimes a cigar was just a cigar, Bill Clinton went far towards proving him wrong.) But I think a less obvious and more pervasive effect of the growth of psychoanalysis was the idea that some small event in the past--the memory of which was probably repressed--could provide motivation for even the most improbable character behaviors.

Playwright Paddy Chayefsky famously derided this as the Rubber Ducky school of character depth: when the villain was eight, someone took away his rubber ducky--and that is why he grew up to be a savage serial killer who dresses in his mother's outfits when he attacks his victims. (Hey, it's no sillier than some of the things you can find in early psychoanalytical case studies.)

Now, I'm not arguing that traumatic past events can't shape a character, or even that a character's primary reason for living can't result from a single event--especially if what we're writing is more of a tale and less of a modernist piece. For example, in William Goldman's The Princess Bride, I'm perfectly content to have The World's Greatest Swordsman roam from country to country searching for the Man With Six Fingers, muttering all the while under his breath, "My name is Inigo Montoya. You killed my father. Prepare to die!" It's a comprehensible motivation--it explains why Inigo was driven to become such a great swordsman--and provides just as much depth as the character requires (i.e. not much). Someone might argue it's a Rubber Ducky, but it's a solid one, and one that is matched perfectly to Inigo's character and quest.

On the other hand, one of the most disappointing books I've read is Thomas Harris' Hannibal. I think Red Dragon and Silence of the Lambs are examples of the best the genre can do, but Hannibal had a number of problems. The biggest error that Harris made, though, was when he tried to Rubber-Ducky the great Hannibal Lecter. Harris is too astute a writer to come up with a simple and arbitrary event in Lecter's past; instead, he crafts a prolonged situation in Lecter's childhood that in many ways matches Lecter's preoccupations. As Rubber Duckies go, it's a bath toy of Olympian scale, but it's still just a Rubber Ducky.

Harris did this to himself. Hannibal Lecter is a great character, full of subtlety and depth, and after we've watched him on the page for two fine novels, we don't want him "explained." A few hints would have been enough. A simple, heroic character like Inigo Montoya can survive a good explanation, but I resented the explanation of Lecter in the same way I'd resent someone summing up the whole of my own life and personality by referring to a single event in my childhood.

And why am I going on about this? Ah. In my work-in-progress (it's always about me, isn't it?), three of the characters have huge backstories--ones that will result in prolonged scenes in the past, which is always tricky to manage. And at least one of the backstories runs the risk of being a Rubber Ducky. So I'm fretting. How do you test to see if your story concept is a Rubber Ducky? Do they squeak when you squeeze them?

Or, as with witches, do you just toss them into the pond and hope they don't float?
Posted by David Isaak at 12:04 PM

I had just the same problem with my novel - which has an odd and ultimately criminal main character, who is telling her own story, and weaving in a lot of her back-story as she goes along. I didn't want to explain her oddness - but then it was a little easier for me because she was first person unreliable, she didn't think she was odd at all. I also refused to do any of the usual 'rubber duckies' (violent women aren't always victims of sexual assault) and tried to have three or four very minor rubber duckies - like not being picked for the main part in a school play. I am still not sure whether I pulled it off or not, but it was certainly a problem I thought about at the time. I think there is a fine line between giving a character sufficient motivation and depth to make them credible, and treating them like a patient on a couch.

And I agree with you about Hannibal. I love Silence of the Lambs but Hannibal was very disappointing.

I think not being able to pee over the side of things is my own, personal rubber ducky. You heard it here first.

There you go, everybody. Now we know why Jenn lies so much.

The real reason Hannibal Lecter became a sadistic cannibalistic psychiatrist must have something to do with a Wendy house.

(Come to think of it, we played Doctor in our treehouse. Though I don't recall playing Psychiatrist...)

I totally agree with you on Hannibal; he's a force of nature, albeit a very very nasty one, so let's just leave it at that. Besides, I like being able to fill in my own explanation. About the sinister zombie devil ducky I'll say no more, but one of my favorite retail establishments sells a waterproof floating duckie with a vibrating beak. 'Nuff said.

David, sometimes your posts give me an 'uh-oh moment'...

One of the twin narratives in "The Dog of the North" is structured entirely around Rubber Ducky principles. That said, the character is up-front from the start that he has a Rubber Ducky, and part of the impetus of the story is to work out what it is. Instead of "My name is Inigo Montoya. You killed my father. Prepare to die!", it's "My name is Inigo Montoya. Prepare to die! Guess why!"

Sometimes--I hope--you can get away with a Rubber Ducky...

If you have many formative elements for a character -- say, different ones that back up different shades of his/her personality -- would they still be rubber duckies? Wouldn't that make all back story of any type a rubber ducky? And in a way, isn't any real person's past just a huge rubber ducky that they cling to in their Odyssean life? ;) (joke)

Well, I think Inigo Montoya's ducky worked quite well--but it was so huge you can picture it propelling a character's whole life. In fact, Chayefsky probably wouldn't have classed it as a ducky at all.

Also, I think duckies in general are safer in tale and fantasy environments--and to some extent, historical worlds, too--where motivations are a little alien to the modern mind, and concepts of honor and justice don't necessarily match up with ours.

Well, I don't think Chayefsky was concerned about a whole host of factors acting on someone. I think he was just bothered by the idea that someone's life could be determined by a some single, fairly small childhood event.

Clearly I need to ramble on a little longer.

I don't want to be simplistic here. It sounds to me that if you try to pinpoint a character's motivation/makeup from one single event of their childhood, that would be a rubber ducky. Correct? So to avoid rubber duckies, you'd have to make sure you didn't try to sum up a person's life with one event or a series of short events. It's not about what happens to a person...it's what they choose to do with what happened to them.

Actually, I think you've summed it up far more succinctly than I did.

The real problem is in explaining why someone with a terrible event in theri life became Ted Bundy and not Mother Teresa.

It's a Rubber Ducky when the author decides to explain it away rather than truly explain it...and there are always choices along the way.

I'm not sure I'd use Mother Teresa as an example of undiluted goodness. It would actually be quite interesting to dig down and unearth her rubber ducky... Having said that, I think you've put your finger, brilliantly, on a big issue, one that needs thinking about carefully. So that's what I'll do. I'll be back...

Thanks David...I've always felt that people become who they are not because of what happened to them, but like I said, because of the choices they make. You have two kids in the projects and one decides, hey, I want to rise above this, while the other goes, my life will never be worth anything so why bother trying? The one turns out to be a successful and the other gets locked in some jail.