A Book Every Writer Needs to Keep Nearby 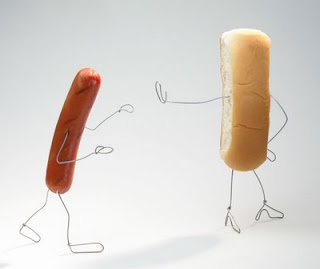 The picture above is entitled Rejection #1, one of the wonderful and peculiar wire sculptures done by the prolific Terry Border at his blog Bent Objects. (Well worth a visit. Some of his stuff is beautiful; some, like his McDonald's Monster, are a little horrific. There is also an "Immature Adults Only" version at Really Bent Objects.)

Rejection #1 seemed like the ideal illustration for this post about Pushcart's Complete Rotten Reviews and Rejections (for Amazon UK link go here). Bill Henderson--the founder of Pushcart Press--had the idea of collecting excerpts from particularly nasty or wrongheaded reviews, giving special attention to those that look jaw-droppingly absurd in retrospect. His partner in crime, Andre Bernard, decided to find the best in rejections. Initially published as three volumes, they have been combined into a single book that is indispensible for any writer trying to maintain their sanity, optimism. or sense of humor.

The classic rejection, of course, is the San Francisco Examiner's rejection of an article by Rudyard Kipling: "This isn't a kindergarten for amateur writers. I'm sorry, Mr Kipling, but you just don't know how to use the English language." That's in this volume, but there is so much more.

Wuthering Heights: Here all the faults of Jane Eyre (by Charlotte Bronte) are magnified a thousandfold, and the only consolation we have in reflecting upon it is that it will never be generally read.

Alice in Wonderland: We fancy that any real child might be more puzzled than enchanted by this stiff, overwrought story.

Fear of Flying: This crappy novel, misusing vulgarity to the point where it becomes purely foolish...represents everything that is to be loathed in American fiction today.

(Some of these are addressed to the author or agent, but others are internal memos Bernard retrieved from the vaults of publishing houses.)

The Spy Who Came in From the Cold: You can have Le Carre--he hasn't got any future.

Lolita: It will not sell, and will do immeasurable harm to a growing reputation...I am most disturbed by the fact that the author has asked that this be published. I can see no possible cause could be served by its publication now. I recommend that it be buried under a stone for a thousand years.

The Fountainhead: I wish there were an audience for a book of this kind. But there isn't. It won't sell.

Ironweed: I like William Kennedy, but not enough. He's a very good writer, something no one needs to tell you or him, and his characters are terrific. I cannot explain turning this down.

Catch-22: It is always possible that a reader who goes in for this zany-epigram stuff will think it is a work of genius, and of course he may be right. But from your long publishing experience you will know that it is less disastrous to turn down a work of genius than to turn down talented mediocrities.

That's only a small sampling of the delights in Henderson and Bernard's great compilation. See now why every writer needs this book? You may be scorned, you may be rejected...but you're in august company.
Posted by David Isaak at 1:28 PM

Thanks David that's certainly cheered me up. I remeber that a Russian magazine editor once wrote a letter to Chekhov, telling him not to send him any more stories as he would never amount to anything.

Wow. Those are hilarious. :) This is also why I feel cringy when I review a book. One day, odds are, I will be one of those people that don't like a masterwork.

In fact, I already am. I immensely dislike The Lord of the Rings (the books), even though I love the movies.

Hey, Sam. That's one reason I never say anything about books unless I can say something nice. Well, except for the "Da Vinci Code."

Just out of curiousity, what didn't you like about LOTR?