How NOT to Write a Novel (My favorite books on writing)

Ahem. As it turns out, there are two books with this title, the other, earlier one having been written by British novelist David Armstrong back in 2003. So I Amazoned that one into my greedy hands. I'll post on it in the next few days.

How NOT to Write a Novel: 200 Classic Mistakes and How to Avoid Them—A Misstep-by-Misstep Guide by Howard Mittelmark and Sandra Newman.

From the back cover:

aaa"What do you think of my fiction book writing?" the aspiring novelist extorted.
aaa"Darn," the editor hectored, in turn, "I can not publish your novel! It is full of what we in the business call 'really awful writing.'"
aaa"But how shall I absolve this dilemma? I have already read every tome available on how to write well and get published!" The writer tossed his head about, wildly.
aaa"It might help," opined the blonde editor, helpfully, "to ponder how NOT to write a novel, so you might avoid that very thing!" 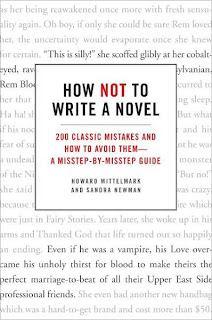 This book was published only recently, but I have no hesitation in adding it to my list of favorites: any book that can make me laugh--and read passages aloud to any victim foolish enough to venture near--is a book I will reread.

The authors are both novelists, and Mittelmark is an editor. Both the editorial and fictioneer sides are on constant display; not only is the editorial exasperation with bad storytelling obvious, but every point is illustrated with a few paragraphs from a story dummied up as an example (and some of these are truly hilarious).

The authors don’t claim they can teach you to write well, nor do they list rules that must be followed. What they do is give train-wreck examples of how not to do things if you want your novel published.

The book follows the format of a brief title, an elaboration subheading in italics, a horrible demonstration of the mistake at work, and then a discussion. Examples of titles and elaborations are:

“And One Ring to Bind Them!” Said the Old Cowpoke
Where the author switches genre in midstream

The Cheerleader
Wherein a sidekick exists solely to admire the hero

The Crepuscular Handbag
Wherein the author flaunts someone else’s vocabulary

The examples of how to not do it are to the point, but they also provide delightfully gratuitous gems, such as the way Leonard Cohen keeps popping up (he appears, for instance, as all twelve members of a jury in a poorly rendered dream sequence, and again as a tattoo on the desirable woman in a sex scene). Charmingly misused words are slipped in for color, as in The air was dry and scented with the exotic krill and catamite sold in the souk.

A pair of full extracts (title, subheading, example, and discussion) are given on the authors' website. Although any of my favorites from the book are too long to quote, I can't resist pulling out a few bits from The Deafening Hug (The unintended love interest). After an example passage that strongly suggests a hug between a brother and sister is more than sibling affection, they note:

Sometimes the author is the last to know. It is all too easy to create a love interest where none is wanted. We call this the Deafening Hug for obvious reasons, and for reasons just as obvious, it should be avoided. Versions include:

[…]Alice in Lapland. Any undue interest or physical contact with children will set off alarms. If you do not want your reader to think he is dealing with a pedophile, dandling of children on knees should be kept to a minimum by fathers, and even more by uncles. If your character is in any way associated with organized religion, whether he is a bishop, a minister, or the kindly old caretaker with a twinkle in his eye, he should not even pull a child from a burning building.

We’re Going to Need a Bigger Closet. Male friends hug, toast their friendship, and later stumble drunkenly to sleep in the cabin’s one bed. The reader is way ahead of you—they are secretly gay, and nothing you say later is going to change his mind. If you do not intend for them to be secretly gay, have Alan sleep on the couch.

The authors also introduce "The Gum on the Mantlepiece," the dysfunctional version of Chekov's famous dictum about storytelling. The "gun" becomes "gum" when something is portentously introduced but turns out to have no significance to the story:

...[D]etails that would go unremarked in real life--a quick glance across the room, the lyrics of a song that's playing when you enter a bar--take on much greater significance in fiction. If you have to run dripping from the shower to sign for an unexpected package, its probably the gardening clogs you forgot you ordered from Lands' End. But if your character is interrupted in the shower by the arrival of an unexpected package, it tells your readers that the package will unleash a momentous chain of events.

Even if you never need the advice found in this book--even if you're not a writer--here's a truly entertaining examination of how to do it all wrong.
Posted by David Isaak at 11:45 AM

This stuff is classic, David!

OK, so I've managed to avoid the temptation to buy any of the 'how to write' books you've mentioned so far because I'm basically allergic to being told how to do anything but this sounds so fabulously amusing that I'm going to have to go on to Amazon right now and order it. Drat, another hole in the boys' college fund...

Hamlet in the Deli: Ophelia wants a six pack and a box of Cocoa Puffs.Let's see Horatio wants pretzels and says he's ready to date again. Where the hell is the Coors Lite?

The idea of seeing prose worse than mine, however deliberately conceived, is also appealing...

The whole book is pretty much that way, Rob. It would make the underpinnings of a fine creative writing class.

David: Coors Lite was banned. It was getting poured into King's ears.